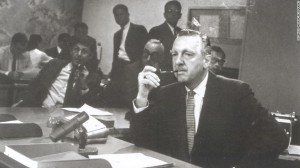 Walter Cronkite sits and smokes a pipe at the CBS news desk with Don Hewitt in the background. Photo: CNN.com

People used to smoke all the time in movies and on television shows; even news anchors used to puff away at the desk. And although you still do see people smoking in movies and TV, it’s not nearly as prevalent as it used to be. Over the years, non-smoking advocates put enough pressure on producers and media owners, particularly television shows or movies that would be seen by children, to butt out and they did.

Why is the same pressure not being put on these same media moguls when it comes to the environment? Pretty much every municipality in North America has some sort of recycling system, but you’d never know it by watching some of the most popular shows.

Turn on the Big Bang Theory:  it’s chock full of take out containers and plastic cutlery with nary a recycling bin in sight.

Ditto for movies. Styrofoam coffee cups still abound. Drivers idle their engines. All sorts of bad environmental habits are on display, in between, you know saving the world, fighting dragons, and solving murders.

Not everyone takes their social cues from Hollywood, but enough people are swayed by celebrity habits—for heaven’s sake, Gwyneth Paltrow advocated that women steam clean their vaginas and I’m sure a few poor sods did it based solely on her recommendation—that it might, subconsciously make a difference. At the very least, it would reduce the amount of trash that those television shows and movies produce.