Today, for the first time in Canadian history, the public was allowed onto the grounds of Rideau Hall to watch a Canadian prime minister being sworn in. Okay, so it took until the 23rd PM but now that Trudeau has broached the matter, I fully expect future PMs to follow suit.

T’was an exciting day for political news junkies and policy wonks. The crowd was, if not exactly elated (because we’re not really like that in Canada), they were all smiles and, for the first time in a long time, no one seemed to be mincing their words. 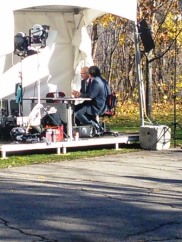 Only managed to snap this one by standing on tiptoe! I could really have used a pair of stilts today…