A note from a friend of mine who’s working in the far north—where the sun doesn’t shine for three and a half months of the year—put me in mind of last Thanksgiving when I tried out a solar cooker for the first time.

It was a gloriously sunny Thanksgiving Sunday when I whipped up the inaugural batch of solar-cooked turkey balls. (For those with a cookery bent, the balls were a combination of ground turkey, chorizo sausage, sage, basil, oregano, garlic, onion, salt and pepper, mayo, and some breadcrumbs. Don’t ask me for amounts; with any kind of meatball, I tend to throw the ingredients together until they seem to have the right pre-cooked texture then hope for the best. I haven’t poisoned anyone yet!)

We’d had the GoSun stove for a while but hadn’t yet tried it. In summer, our back yard gets about five or six hours of prime southwest sunlight, more than enough for the various herbs and ground cherries and salad greens I grow back there; in October, however, when Canadian Thanksgiving is held, the deck gets only two or three hours of strong midday sun. I would need to work fast. 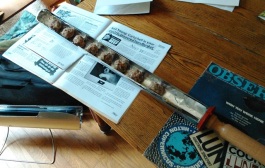 Just before noon I lined one of stove’s two cooking trays with foil (for easy clean up) then loaded in the balls. Each tray is fairly narrow and doesn’t provide a lot of room but it’s enough to cook a meal for two people. At 12:30, when the temperature had reached a warm 18°C, in went the balls. 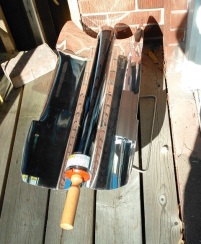 Every so often I would adjust the reflectors or shift the entire stove to take better advantage of what little sun was on offer.  To my surprise, after only half an hour the balls were cooked through and the ones at the end had even started to brown! I rearranged and flipped the balls and slid the tray back in.

After another half an hour, all the balls were browned to perfection and ready to eat! With the return of the sun to the back deck for ever longer amounts of time, I hope to be cooking up a solar storm again soon. I’m thinking of baking some cookies next…

4 responses to “Great balls of turkey!”